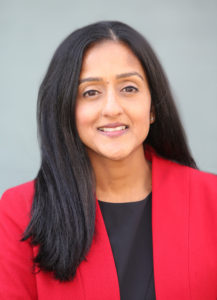 The Legal Aid Society of the District of Columbia congratulates our 2017 Servant of Justice Honoree Vanita Gupta on her new post as President and Chief Executive Officer of The Leadership Conference on Civil and Human Rights (effective June 1).

This exciting announcement is relatively hot off the presses, having been announced publicly just yesterday:  on June 1, Vanita, the former Head of the U.S. Department of Justice’s Civil Rights Division, will succeed Wade Henderson, who served as President and CEO of The Leadership Conference on Civil and Human Rights since June 1996.

The accolades about Vanita’s selection have been pouring in, from friends of Legal Aid such as Eric Holder and Judy Lichtman.  But 2015 Servant of Justice Honoree Wade Henderson perhaps put it best when he said, “I could not be more pleased to pass the baton of leadership to Vanita, a talented litigator, strategic visionary and tireless advocate who is deeply committed to building a country as good as its ideals, the mission of The Leadership Conference.”

Vanita will be honored this year at our 2017 Servant of Justice Awards Dinner along with former Solicitor General of the United States Donald B. Verrilli, Jr., now of Munger, Tolles & Olson LLP.

Tables and tickets are still available.  Please join us on April 25 at the JW Marriott (1331 Pennsylvania Avenue, NW) to celebrate Vanita and Don, as well as our Klepper Prize for Volunteer Excellence honoree, David Young of Ropes & Gray LLP.

*Buy Tickets for the Dinner*