Legal Aid Society of the District of Columbia 01 Feb, 2022

Legal Aid was saddened to learn of the passing of James VanR. Springer, who died on January 26, 2022. Jim served as a Volunteer Staff Attorney at Legal Aid for eight years, helping countless DC residents and mentoring dozens of junior Legal Aid attorneys. In 2012, he was honored with Legal Aid’s Servant of Justice Award for his faithful dedication and remarkable achievement in ensuring that all people have equal and meaningful access to justice, joining the ranks of Vernon Jordan, Eric Holder, Janet Reno, Charles Horsky, and many others. 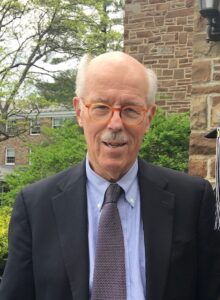 Jim joined Legal Aid in 2005 after his retirement from the law firm of Dickstein Shapiro LLP, where he was a prominent partner in the firm’s general litigation practice for more than three decades. Prior to working at Dickstein -- from 1968 to 1972 -- he served as a Deputy Solicitor General, during which time he presented ten oral arguments in the Supreme Court of the United States.

When Jim offered his services to Legal Aid, he simply asked where his services were needed most. He came on as a Volunteer Staff Attorney in the Public Benefits Law Unit, helping clients navigate the bureaucracy of the Social Security Administration and ensuring that people who were elderly or living with disabilities could fill their prescriptions through their Medicare Prescription Drug Plans. He continued to volunteer with Legal Aid’s Medicare Part D work for several years after he stopped working full time at Legal Aid. In addition to the Servant of Justice Award, Jim was honored with the DC Bar’s Pro Bono Lawyer of the Year Award in 2007.

Throughout his time at Legal Aid, Jim was universally adored by his clients (who would always ask for him by name) and his colleagues.

“I worked with Jim for about 10 years and he never gave up on my case,” former client Virginia Rayford told us. “And even after he retired, he continued to handle my Part D work. Jim was a gentle giant. He was so kind and I have truly been blessed to know him."

We are so grateful for his help in meeting our clients needs and all the wisdom he shared with us from his years of experience.

“He was so talented, yet so humble,” said Nina Wu, Supervising Attorney in the Public Benefits Law Unit. “So passionate about serving Legal Aid clients and tearing down any institution that stood between them and getting what they needed and deserved, but also so incredibly funny.”

Jim was also a tremendously generous financial supporter for Legal Aid and was one of the 20 most generous individual donors in the organization’s history. At his family’s request, donations to Legal Aid in Jim’s honor may be made here.

Legal Aid Society of the District of Columbia 01 Feb, 2022

The District Must Do Far Better than Mayor Bowser’s Migrant Services and Supports Emergency Act of 2022
Traducción al español al final For months, the governors of Arizona and Texas have been busing migrants from the southwest border to the District to protest federal immigration policies that limit their ability to turn people away at the border. Just yesterday, Texas Governor Greg Abbott arranged for two buses of migrants to be dropped off outside of Vice President Kamala Harris’s residence in a publicity-seeking act of racism and xenophobia with callous disregard for the migrants’ human rights and dignity.
Read More

Making Justice Real Campaign Raises $3.3 Million for DC Legal Aid
For the third-consecutive year, DC’s legal community came together to raise more than $3 million for DC Legal Aid through the Making Justice Real Campaign, setting a new record at $3,305,388. Nearly half of the total was raised in the last week of the two-month drive, which ran from June 6 to August 5. “It is incredibly humbling for thousands of people from nearly every major law firm in the District to unite behind Legal Aid’s mission,” said Joan McKown, President of Legal Aid’s Board of Trustees and a Partner at Jones Day. “Especially at a time of increasing need for our client community, this is unbelievably good news.”
Read More

DC Council Committees Must Approve the Domestic Worker Protections Bill This Fall
Legal Aid is deeply concerned about Chair Mendelson’s recent decision to change the committee referral for the Domestic Worker Employment Rights Amendment Act of 2022 (Bill 24-712). As a strong supporter of the Domestic Worker Employment Rights bill, we believe his re-referral could effectively stall the bill’s progress during the final year of Council Period 24. This triple referral causes an unnecessary delay that will hurt essential workers, such as home health aides, to whom we regularly provide direct legal services. Legal Aid urges Business Committee Chairman McDuffie and Government Operations Committee Chairman Robert White to consider and mark up the measure immediately (September or October) when the Council returns from recess so that the Council can pass the bill before the end of the year.
Read More